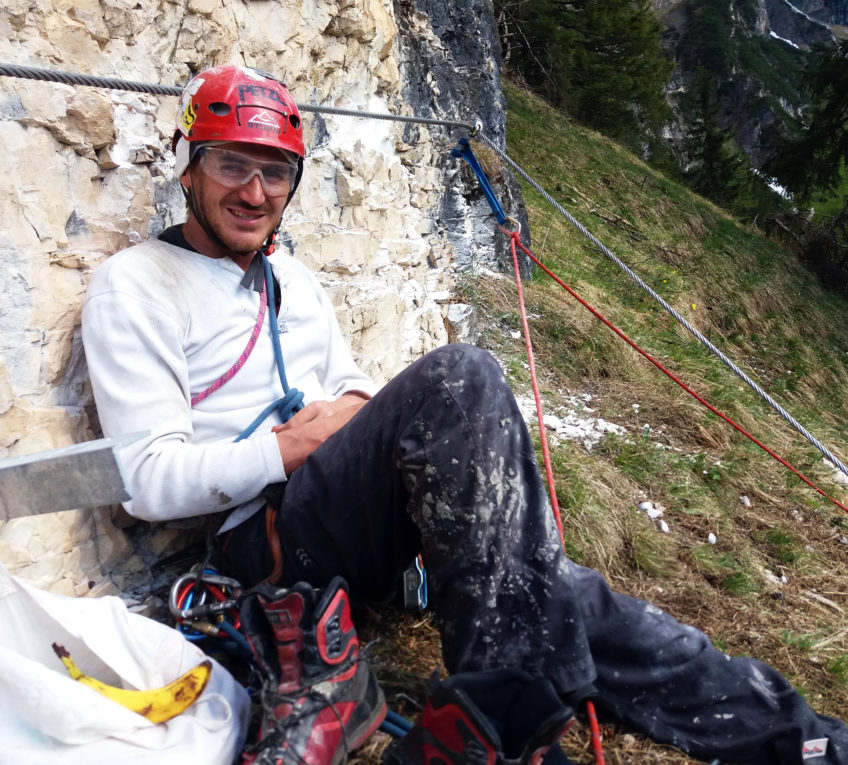 “There is, actually, no exciting personal story – I cannot tell you why I like climbing or why I do what I do”. The 30-year-old mountain guide and prospective Doctor of Technology began our interview with that sentence. I do believe, though, that there is much to tell about the “High Wire Puller”, who has already put two “via ferrata” (fixed rope routes) projects into practice in the Wipptal.

Thomas was 12 years old when he first felt the urge to climb. At first, his parents were not exactly enthralled by the youngster’s idea, but then granted him his wish and enrolled him on a climbing course. “I dreamt of climbing the massive Stafflach Wand above my parent’s home in St. Jodok. I wanted to abseil down from up there on the wall, drilling machine in hand and install safety hooks. The attempt remained unsuccessful, because the rope became entangled in the terrain and the rock was unsuitable”, tells Thomas.

If not for him – then for others
“However, after that brief adventure, the desire persisted to make the Stafflach Wand accessible to a wider public, interested in climbing, so I hit on the idea of planning a “via ferrata”. I analysed the success factors of good fixed rope routes: including a short ascent, medium level of difficulty and a manageable length. All of that existed in St. Jodok. Following presentation of the idea, the then 24 year old, immediately got the contract for implementation, and now – 6 years later – there are already more than 15,000 ascents per year!

All good things come in twos – or three?
He started the planning of the second via ferrata, at St. Magdalena in the Gschnitz Valley, due to a serious injury to his foot. “I sought refuge in the project planning to distract myself with something that gave me pleasure”. In addition to his dissertation, he developed a second via ferrata and an Alpine Safety Area, in conjunction with the Mountain Rescue Services. “The most beautiful thing about the St. Magdalena via ferrata is the ascent variant combined with the difficulty level A (easy), because families, especially those with children and accompanied by a mountain guide, can really immerse themselves in the world of via ferrata”, says the young mountain guide.

Contact details of Thomas:
Thomas is a state-approved mountain and ski guide, and will gladly accompany you on your first visit to a via ferrata.
Tel.: +43 664 47 33 231
email: mail@thomassenfter.at