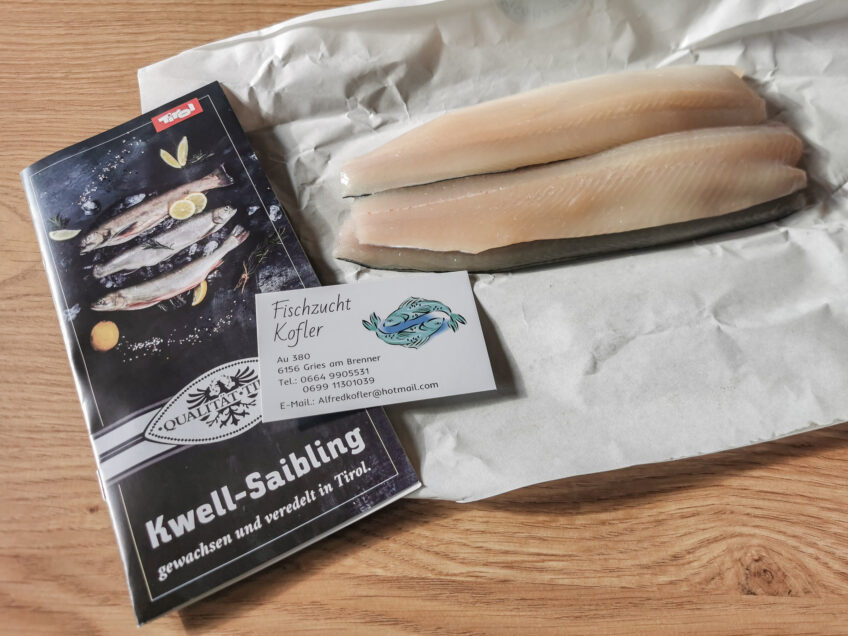 Kwell-char from the Kofler farm

Top quality local fish from Obernberg in the Wipptal

For a few years now, Petra and Alfred Kofler have been successfully running a small fish farm on their farm in Obernberg. They breed and sell the Kwell-char with the Quality Tyrol seal of approval. The char is a local fish species of the highest quality in appearance and taste. I visited them on site, took a closer look at their ponds and the small slaughterhouse and immediately took some fresh fish with me.

Fish farming as a second mainstay
At the Koflerhof in Obernberg, Alfred and Petra Kofler decided about four years ago to build up another mainstay with fish farming in addition to farming with dairy cows. Alfred is friends with the fish farmer Walter Vötter from Gries and helped him five years ago to rebuild his fish farm in Gries. Walter then said that he also had the best conditions for fish farming at home in Obernberg: plenty of fresh, cold water and also a free area for ponds in front of the farm. Yes, why not? Alfred and Petra then decided to give it a try. In 2018, they started on a trial basis with a pond and a few fish from Walter. It quickly became clear that just keeping fish in ponds without proper training as fish farmers and slaughtering them themselves was not satisfactory. They wanted to be independent, slaughter their own fish and sell them directly from the farm. Petra therefore decided in the same year to attend training courses for fish farmers at the “Landwirtschaftliche Lehranstalt für Fischzucht in Starnberg” (DE). They also wanted to participate in the Kwell-char quality programme right away. This required, for example, expert opinions on the quality and temperature of the stream water from the Frader Valley, a separate fresh water supply for the six near-natural ponds with return flow into the stream, and strict compliance with the hygiene requirements for a slaughterhouse. In 2019, everything was finally ready to start fish farming professionally. “I never thought I would become a fish farmer one day,” Petra laughs. But things often turn out differently in life than you think…

“Fish Emperor” award confirms high quality
Several certificates with awards and medals hang in the small kitchen of the slaughterhouse. In their very first year, they won a gold award as overall winner in the fresh fish category at the “Fisch Kaiser der Messe Wieselburg” – one of the best-known awards for freshwater fish in Austria. Every year they were able to achieve a gold or silver award, just not the overall winner anymore. “This is definitely another one of our aspirations,” Petra explains.

What is a Kwell-char?
Kwell-char belong to the family of salmon fish (salmonids). The “Qualität Tirol” seal of quality designates the Kwell-char as such because its habitat is clear spring and mountain water. The fish grows slowly in the cool water. This guarantees firm meat and the best taste. Not only the water must be of high quality, but also the ponds must be designed close to nature and the stocking density in the ponds must be kept low. In addition to these criteria, of course, no medicines against diseases, antibiotics or hormones may be used to promote growth.

Slow growth for ideal meat quality
Every year, Alfred and Petra buy about 15,000 half-year old fingerlings from Walter Vötter in Gries, who has a hatchery in Lueg. The fish are then hand-fed in the six ponds in front of their farm until they are ready to eat after about 2 to 2 ½ years. The slow growth guarantees optimal meat quality. Since not all fish grow at the same rate, they are repeatedly re-sorted in the different ponds. When asked how many fish are in the pond, Petra cannot give me an exact answer. Not too many and not too few, so that they feel comfortable. It’s also interesting that a fish needs about 1 kg of food in its lifetime – the amount of food is the fish farmers’ guide to how many fish are in the ponds. Thank God they don’t have any problems with diseases, Petra says, because the water is very cool with a maximum of 8 degrees and has an optimal pH value. The conditions on site and the quality of the fish are strictly controlled annually by the AMA organic inspection.

How do you get Kwell-char?
The fresh Kwell-char or also the smoked version is available from Petra and Alfred either by advance order on Wednesdays, Thursdays and Fridays from the farm (address: Au 380, 6156 Gries a. Br., phone: 0043 664 990 5531 or 0043 699 1130 1039, e-mail: alfredkofler@hotmail.com) or also at the farmer’s market in the market hall in Innsbruck every Friday and Saturday from 8:00 to 12:00. If you want to taste the fish directly, you can do so at the Vinaders Inn (open Thurs – Sun). Don’t be confused by the address of the Kofler farm – although geographically it is in Obernberg, it still belongs to the municipality of Gries.

You can also get Kwell char from the following other fish farmers in the Wipptal:

Finally, I ask Petra if she has any other concerns. “Yes,” she says, “it would really be desirable if people would generally buy more local products and food. It is a pity that, for example, when it comes to fish consumption in Tyrol, local fish only make up a very small percentage. Over 90 % is imported from other countries and bought from the freezer in the supermarket.”