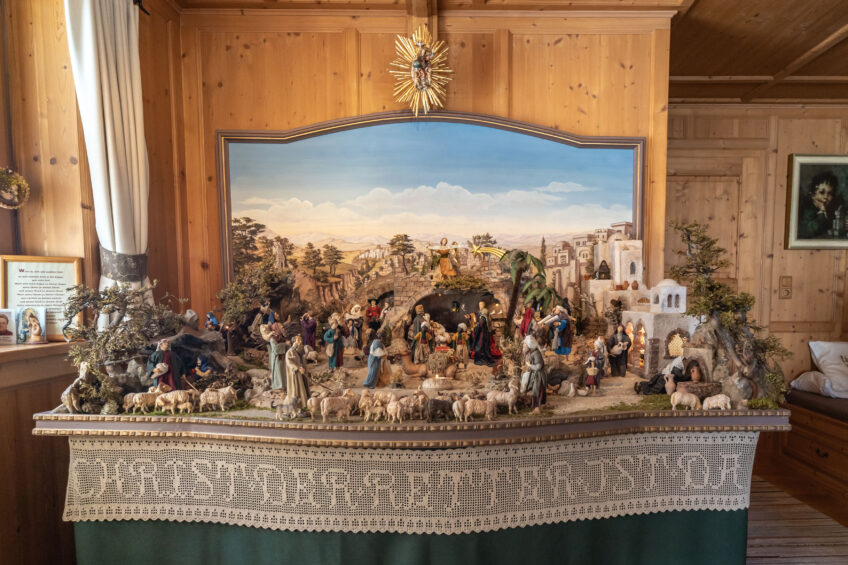 Nativity scene made in Wipptal

The nativity scene is just as much a part of Christmas as the Christmas tree or the Advent wreath. In most cases, it is painstakingly built by hand with countless hours of work during a nativity workshop. This is why it is proudly displayed and presented in the home from December until Candlemas on February 2nd. There are two types of nativity scene. One is the Tyrolean nativity scene, where the buildings and surroundings are reminiscent of a farm in the mountains. And the oriental nativity scene, which has features from the Middle East, such as palm trees and camels.

The nativity scene portrays a number of key events in the biblical narrative. From the Annunciation to the search for shelter to the birth of Jesus and the subsequent flight of the Holy Family. It is really important to take your time to properly comprehend all the scenes and to recognise the many details. The detailed narratives of the nativity scene designer themselves help, of course.

Special nativity figures that require a little effort to earn

It is the elaborately designed and very detailed buildings, trees and caves as well as the nativity figures that make the entire display particularly coherent. They were made by Hilde Purzer from Mehring Öd in Bavaria. The clothing (consisting of glue-impregnated fabrics) is draped with a special silver wire construction to achieve a particularly authentic look. It is only the hands, feet and the head of the figures that are sculpted. Every new nativity scene proprietor can start by purchasing the Holy Family, two shepherds and two sheep. One to max. two figures are then added each year, since the nativity figures are meticulously handcrafted and Hilde experiences a very high order volume, as Adi reports.

“I was already 60 years old when I built the nativity scene and I wanted to have it for myself too and not just for the sake of posterity,” Adi tells us. So he first had to prove to Hilde that he had a special attachment to the nativity scene, because many would only put them on display to “show off”. Once Hilde was also convinced of Adi’s biblical knowledge, the artist agreed to make and sell him several nativity figures at once.

A Tyrolean couple in Bethlehem

But if you look very closely, you can also discover a couple who do not quite seem to fit into this era. It is Adi and his wife in Tyrolean costume, who witness the biblical scene as pilgrims. Even the facial features of the figures were carved to resemble them.

The significance of the nativity scene to Adi can be seen throughout his home. You can always spot displays of the Holy Family that he has brought back from pilgrimages (he has been to Bethlehem twice himself). He has even set up his own nativity room in the cellar, where another work of art he handmade can be found – a Tyrolean nativity scene.

Tip: During Advent there is always a nativity scene exhibition and various Christmas markets in the Wipptal where handicrafts can be admired and also purchased. The best thing to do is to check our calendar of events.