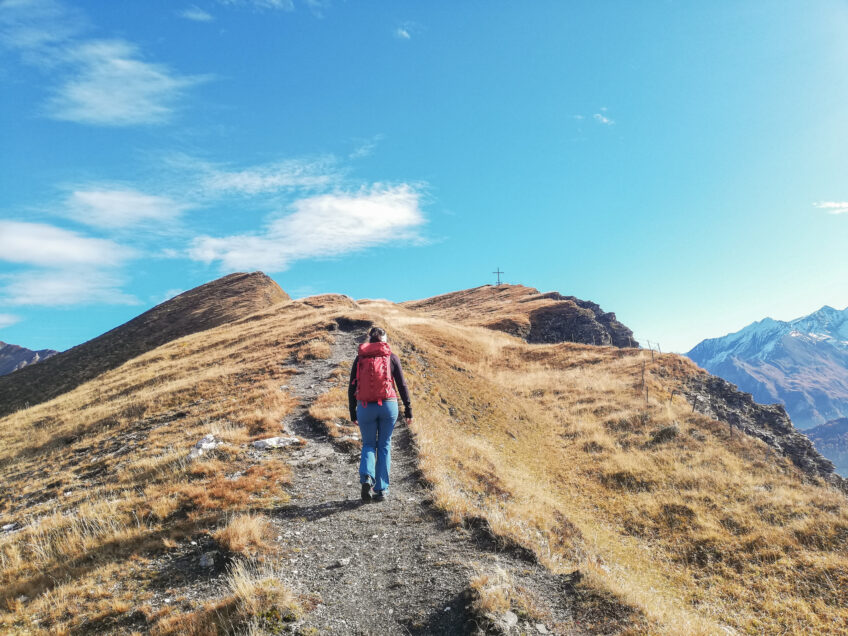 When the mountain meadows and forests slowly turn reddish and the view in the mountains becomes clearer again, a quieter yet active time in the mountains begins. Autumn is the ideal time for hiking. Actually even better than summer. The temperatures are pleasant and you can sleep in and start your mountain tour a little later. When planning a tour, it is important to choose routes that are located on south-facing mountain slopes in order to get the maximum amount of sun.
Depending on the weather and snow conditions, the tours can be done until December.

The hike starts directly in Hochgenein. From the Edelraute car park, the road leads out of the valley to Hochgeneiner Hof, where the trail branches off. On some days, the final destination can be the Hochgeneinerjöchl with its special summit cross. If you are still in good shape, it is definitely worthwhile to continue towards Sumpfkopf. Following the ridge in a westerly direction, first through last forests, then later through mountain meadows, the diligent hiker reaches the longed-for final destination – the Sumpfkopf.

There are two different ways to descend. One is to go back the same way or to do a short circular hike. In the hollow shortly behind the cross, the trail heads downhill. After a short, crisp descent, follow the small path back through pine forests and flowering meadows, past the natural biotope “auf der Lacke”. This part of the tour is particularly beautiful, here you can observe many different plant species, birds, amphibians and insects. But everything beautiful has an end and finally you reach the ridge and the trail junction again, including the turnoff to the Padastertal valley.

The Hochplataeu Padaun offers wonderful opportunities for all kinds of excursionists or hikers to explore the area. Those who want to take it easy can take a walk to the “Blind Lord” chapel. For the more athletic among you, a hike to the Padauner Kogel is an option. In both cases, however, a stop at the Steckholzer mountain inn is a must.

The path to the Padauner Kogel leads from the car park above the Steckholzer inn along the asphalt path further into the valley to the last farm. There the trail 83 starts to the right. The well-marked trail leads on a pleasant incline initially through the forest and then through beautiful mountain meadows. From the summit with its cross, you have a wonderful view of the Olperer and Fußstein in the Valsertal basin, the Nordkette and the Serles, and to the southwest of the Obernberger Tribulaun with the Schwarze Wand (so many more peeks to climb). When I once hiked up the Padauner Kogel in November, it showed itself from its absolutely windless side. You could even flake in the meadow around the Kogel and enjoy the sun – something I have never been able to do in summer. But the tour is worthwhile in good weather at any time of the year!
The descent is the same as the ascent.

The Blaser – known as the flower mountain – can also boast a breathtaking natural backdrop in its autumnal guise and, thanks to its southern exposure, can be climbed until late autumn. If the snow waits a little longer, even into December. I did this hike a few years ago in a winter with little snow, only on 30 December. At that time there were only small patches of snow, but you could avoid them very well.
The starting point for the hike is the Waldfest car park in Trins, for which a fee is charged. Trail no. 30 starts above the church in the Leiten district. The marked trail first leads uphill across a meadow, then out of the valley through the Platzerwald forest. On the way up, you cross the wide forest road that leads to the Blaserhütte and stay on the trail. Already above the forest in the meadows, the trail meets the forest road again. Follow this path to the Blaserhütte (only open until the end of September) and from there it is only a few metres to the summit with the cross. The route to the hut can also be covered by mountain bike or e-bike until early autumn. Descent as ascent.

Tip: To be on the safe side, and to be prepared for possible snowfields during the autumn hike, you can borrow a free of charge Grödel and poles at the TVB office in Steinach (deposit € 40.00).

The Gerichtherrnalm – inconspicuous but special