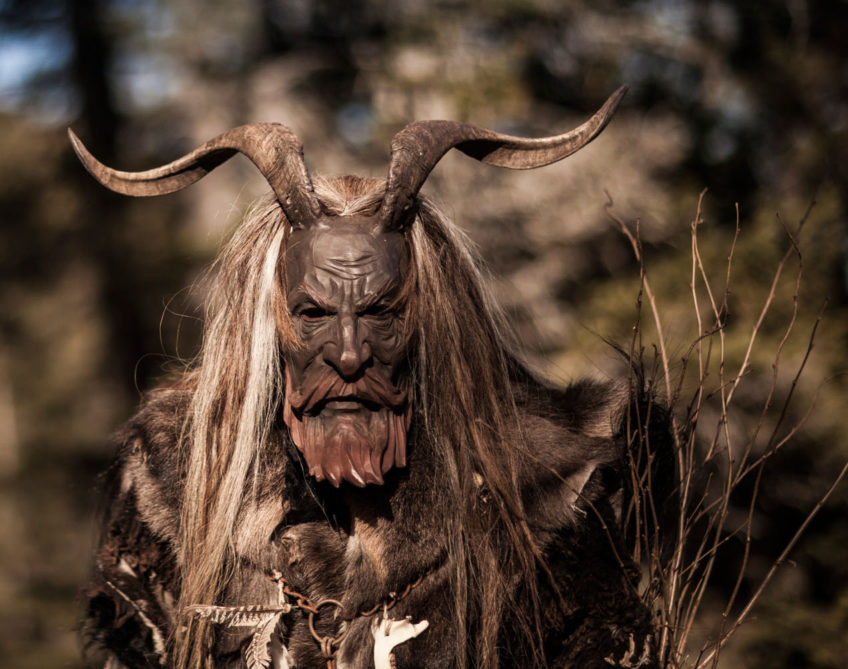 A tradition with frightening characters
The big Krampus parade involving 150 Krampus characters has been held in Matrei every year on the evening of December 5th for over 25 years without interruption. We had a chat with the organiser Christoph Pernlochner, the chairman of Matreier Tuifl.

Because not everyone is familiar with the term “Krampus”, a brief explanation should be given to begin with: This horrifying character in the form of a devil, which dates back to pre-Christian times, follows Saint Nicholas on his visits to children. Those who haven’t been good will feel the full wrath of the Krampuses’ Rute (traditional besom/broom made from natural materials). In other places, the Krampus is also called “Kramperl” or “Bartl”, in Tyrol in many places also “Tuifl”.

From rubber masks to high-quality wooden masks
The Krampus show is an important tradition in Matrei following the visit of Saint Nicholas to the village. “The parade has taken place every year since 1992, when a few young men wearing rubber Krampus masks startled the people of Matrei. Two years later, the Krampuses already had carved wooden masks from the well-known carver Norbert Danler,” reminisces Christoph. An association was founded in 1996 and a St. Nicholas procession was organised before the Krampus parade. Sometimes up to 300 Tuifl run through the streets in Matrei or pull self-made carts. Spectators are playfully scuffled by one of the lads and some of their faces are blackened by the Krampus. You shouldn’t forget to put on old clothes!

An association for generations
“Many young men might be fascinated by being a Krampus – the same could be said for some of the kids and adolescents in the valley. The youngest Krampuses in the annual parade in Matrei are about 5 years old and sit in the carts. There are about 20 children and another 30 young lads running around as fully masked little Krampuses”, Christoph explains. The association includes young and old – with an age range from 5 to 60 years. New members are always welcome and can borrow their garments from the association at first. Christoph himself and some others buy a new outfit every two years, which can cost more than € 2,000 Euro.

Great team spirit
Christoph has been chairman of the Matreier Tuifl association since 2007. Not much has changed in the committee since that time. “We have a very good team spirit within the association – we’re just all on the same level. It probably also works so well because we only see each other very intensively for two to three months every year and then almost not at all in the other months. The association will be active every day from October with preparations for events such as cart building, decorating or ideas for shows in other locations. There are always many volunteers and other associations involved without whom the events would not be possible. They run stalls, bake traditional Tyrolean “Kiachl”, roast chestnuts or prepare the sacks for the St. Nicholas parade.

Fascination of transformation
When asked what fascinates Christoph himself so much about the Tuifl parade, emotion is his main attraction: “It’s simply amazing and a fascinating feeling to transform into another creature with a carved mask, thick fur and large bells.”