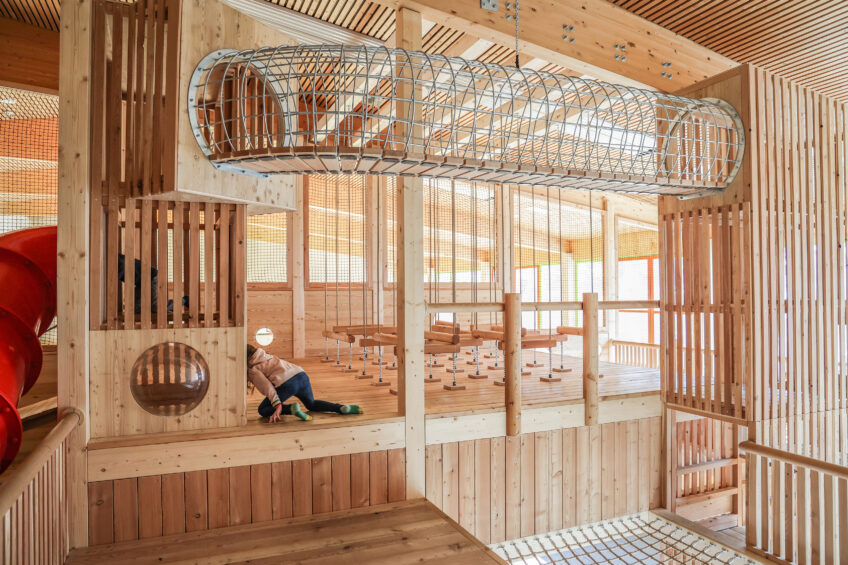 Who can really say they’ve never experienced it? When it’s rainy weather on holiday with the whole family and you need a good substitute plan. We sent Ewelina, Matthias and their daughter Lena with friend Iva to the new indoor wooden play area in Steinach, which has been open since summer 2021.

The BBT Tunnel Worlds next to the JUFA Hotel Wipptal have already become a well-known and frequently visited excursion destination for families. But what you didn’t know was that during the Covid-19 hiatus, new exhibits and entirely new themed worlds were developed, e.g. the train simulator. This is where children can playfully ride the S-Bahn train between Innsbruck and Brenner. We therefore recommended a short visit here after the wooden play area. The two play worlds are, so to speak, “door to door”.

Tyrol’s largest indoor wooden play area
A new children’s play area was built directly next to the Tunnel Worlds in 2020/21 covering more than 400 square metres and several levels. In terms of theme, the adventure play world at the JUFA, which is made almost entirely of wood, is based on that of the Tunnel Worlds. Dad Matthias thinks the new playground is very successful because it is designed to be spacious with many different elements to discover. His daughter Lena is particularly fond of the fast “tunnel slides” and the climbing wall in the form of a tunnel boring machine. “The children can move freely here and practice different skills on the elements. There is also a small climbing room with bouldering grips and large mats on the ground directly next to the wooden playground,” says mum Ewelina. The JUFA Hotel next door is a great place to stop for a refreshment.

An idea for even more climbing fun
We did, of course, also ask the Herzog family if there was anything they missed. “In essence, the play area is very well done. But we also have an idea for developing it further. At present, the grips in the climbing area are screwed to the wall randomly. Maybe the grips could be arranged according to colour and routes with different levels of difficulty, and the levels of difficulty could be written on the wall, so the children would have more motivation to improve,” says Matthias. We think that’s a really good idea and will try to implement it.

TIP: Visit the indoor wooden play area at the JUFA Hotel Wipptal, Huebenweg 25, in Steinach. The best way to access it is via the JUFA entrance and then ask at reception for the play area. The play area is open daily during the hotel’s opening hours. The Tunnel Worlds beside it are open daily except Mondays from 10:00 to 17:00 with free entry.