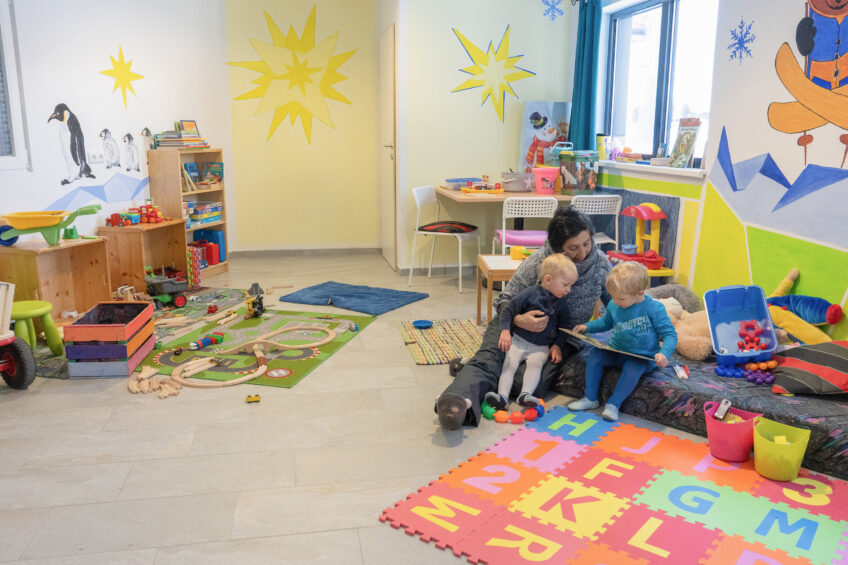 If the skiing day takes too long or is too strenuous for the young skiers, there is the possibility to take a cosy break with loving care in the Bear’s Nest of the Panorama Restaurant.

A little break for little skiers’ legs
A day of skiing can be quite exhausting for a child. Just putting on the equipment and getting to the ski lift in ski boots is a challenge for little legs. That’s where the childcare offer in Bear’s Nestat the Bergeralm middle station comes in just at the right time for many families. A stop at the Bear’s Nest provides relaxation for the children and gives parents the opportunity to continue skiing without worrying.

“Grandma” Friederike
Friederike has been looking after the small, tired skiers at the Bergeralm for many years and tells us in her quiet, friendly way that this job fills her with a lot of joy: “When the children come to the Bear’s Nest, you first have to let them rest a little and give them the feeling that they are safe and can feel at home.” Friederike often reads to the children or asks older children to read to the smaller ones. That is why it is also important to her that there is a good selection of children’s books in the Bear’s Nest. “You can also inspire children with singing,” Friederike knows. She usually plays her guitar for this. “It’s interesting that even today almost all the children know the lyrics of the children’s songs by heart that we used to sing as children,” she says. “Then, when the children know each other a little better, they play in small groups with the toys offered, depending on their interests. They especially like to play role-playing games. A very nice experience for me was when a group of children played school and a girl with a physical impairment was allowed to be the teacher. There are also no language barriers among children, children understand each other without many words.” When asked what the children would call her, Friederike answers with a smile: “Many call me grandma, but most of them call me by my first name, although it is rather rare and also long.

Analogue games only
You won’t find computer games, Gameboys or other game consoles in the Bear’s Nest. Friederike says: “This may seem old-fashioned to some, but I believe that even in this day and age, children prefer games that do not require technology. For example, children of all ages love crafting with paper, cardboard and scissors. Crayons and paper are part of the basic equipment anyway, which is also renewed every year.”

Small but nice
The secret of the Bergeralm childcare centre’s success is surely its manageable size. In the high season, about 25 to 35 children come throughout the day, and most of them stay for one or two hours at the most. So the number of children is well distributed over the whole day. In the low season, there are only about eight to ten children per day. Friederike particularly enjoys these days, because she can pay special attention to the wishes of the individual children. Then, of course, they often snuggle in the reading corner and make themselves especially comfortable.

Tip: Childcare in the Bear’s Nest in the panorama restaurant at the Bergeralm mid-station is free of charge with a guest card. Children from 3 to 12 years are welcome from Monday to Friday and on Sunday from 10.00 to 15.00.