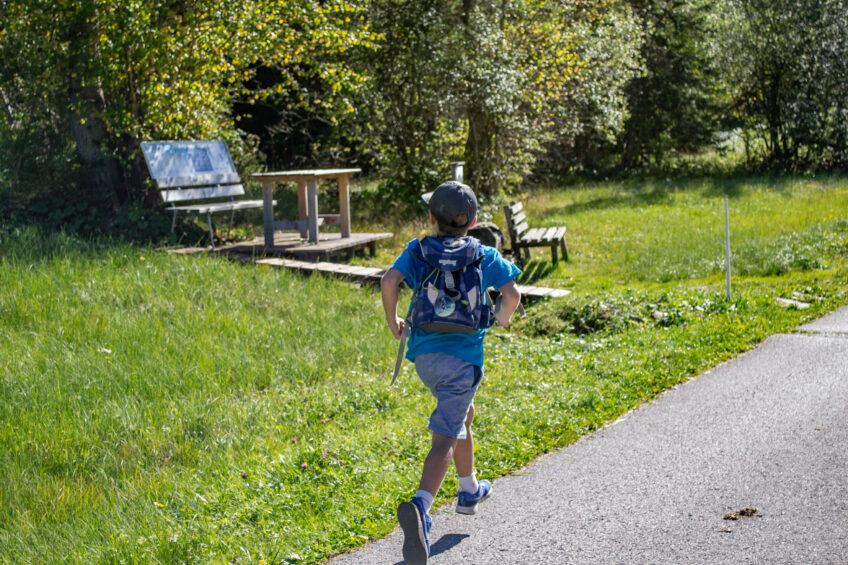 On the Trail of Water

Out and about with Gschnitzy and Gossy through the Gschnitz Valley

The two water drops “Gschnitzy and Gossy” narrate exciting stories along the Trail of Water in the Gschnitz Valley. We learn a lot of interesting facts about the topic of water while following them. I hiked part of the water trail in the Gschnitz Valley together with my nephews Emanuel and Raphael.

The Gschnitz Valley has been home to a new water trail along the Gschnitzbach stream with a total of 13 stops since last summer. There’s plenty for children to discover and experience: Where does the water in the Gschnitzbach stream come from? Which inhabitants live in the water? What forms can water take? These are only some of the questions that get answered at the various stops. Me and my two eight-year-old nephews acquired an overview with the accompanying flyer. It soon became clear that we would not be able to complete the entire route just in one afternoon – perhaps we should’ve taken our bikes! After all, it’s 15 kilometres from Steinach to the last stop in the mill village and over four hours of walking.

Puzzling fun with Gschnitzy and Gossy
There is a water drop puzzle to solve at each stop. This requires a smartphone; you scan the QR code on the board, download the free “My Bankerl” app and join the “Gschnitzy & Gossy” trail in the app. Once Emanuel had read the text on the information board at the starting stop opposite the JUFA Hotel in Steinach aloud to us, we were already able to answer the first riddle question in the app correctly after a short deliberation. So on we hurried following the teardrop-shaped signposts to the next stop. At first, we were hopeful that we would make it to the mill village after all, because there was a little surprise waiting for all the children who answered the questions in the app correctly.

Rest and play at the Trins Energy Playground
We made good time until we reached Trins – we had already made 4 stops. We passed the Liftstüberl, crossed the bridge to the other side of the stream and continued to the next station at the landscape pond with energy playground. Here the boys were unstoppable – now they played, did gymnastics and then rested in the shade. Time flew by until we had explored everything and learned everything we needed to know about sustainable energy production.

After almost an hour, we walked further into the valley, where we looked for frogs along the wet path and refreshed ourselves at the Armkneipp pool. At the Pumafalle we decided to stop for a snack. After the meal, Emanuel and Raphael’s motivation waned. It was already early evening and we decided to walk only as far as the nearby bus stop and take the next bus back to Steinach. We planned to do the rest of the walk the next weekend and that’s when we picked up the surprise in the mill village. The twins had really earned it after the long hike!

Tip: Those who want to explore the water trail in comfort can rent an e-bike at the “wipprad” bike rental shop in Steinach (Brennerstrasse 78). There are also e-bikes for children and 20% discount on the rental with the guest card.